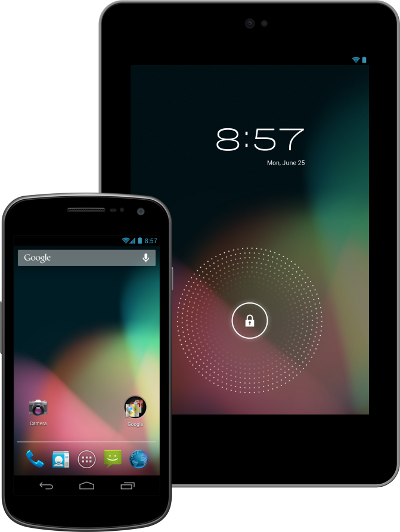 The wait is over, and it's now official as Google announces the next version of Android, named Jelly Bean, at Google I/O. It's version is 4.1, unlike the speculations of Jelly Bean being Android 5.0, but that's not the case here. It's official, and it's Android 4.1 Jelly Bean! Besides Jelly Bean, Google also announced the gorgeous 7-inch tablet, named Nexus 7, with hardware manufacturer being Asus. We will cover a detailed review of Nexus 7 in coming days, but for now, we are going to focus on the center of attraction, Android 4.1 Jelly Bean!


From the version number, we can easily guess that Jelly Bean will be more towards internal system updates rather than more user interface updates that we witnessed in the transition to 4.0 Ice Cream Sandwich from 2.3 Ginger Bread. But there is no point being discouraged by the version number, as there is always something new in the offering by each and every Android updates, and Jelly Bean 4.1 does not disappoint us, in fact, it's more than we were expecting. Here we are gonna discuss what is new in the offering from the latest and the greatest Android OS, Android 4.1 Jelly Bean.


Android 4.1 Jelly Bean will be available in a few weeks, to be precise, in mid-July as promised by Google. Besides the brand new Nexus 7 tablet, the first devices to receive the latest Android update from Google will be the Galaxy Nexus, Nexus S, and the XOOM. Following Google’s mind boggling Keynote announcement at Google I/O today, the Android team posted the platform highlights, recapping all of Jelly Bean’s new features. Here are a few we are particularly excited about.
Buttery Smooth and Fast as ever, More Responsive
As a fruitful result of the success of Google's "Project Butter", the latest version of Android is just like the saying goes “as smooth as butter”. Jelly Bean is the most responsive and impressive version of Android to date equipped with triple buffered graphics, extended vsync timing and instant touch response that boosts CPU at the next touch event that makes sure that the lag in UI is minimal.
New Revamped Notifications 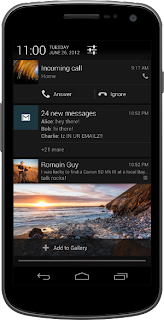 Android 4.1 Jelly Bean brings a major update to the Notifications from 4.0 Ice Cream Sandwich. Apps will now be able to display bigger, richer notifications to the users with giving the privilege to expand and collapse it with a pinch. Notifications support new types of content, including photos, have configurable priority, and can even include multiple actions assigned to them.
Updated Android Beam
Android Beam was a center of attraction when it was announced in 4.0 Ice Cream Sandwich, but wasn't getting the number of users that was expected, much due to unavailability of NFC on the most number of devices and limited feature support from Android Beam. But that won't be the case in Jelly Bean 4.1 as the Android Beam is updated and makes it easier to share images, videos, or other payloads by leveraging Bluetooth for the data transfer. When the user triggers a transfer, Android Beam hands over from NFC to Bluetooth, making it easier to transfer and manage files between devices.
Smart Application Updates From Google Play
The latest feature of Google Play introduces a better way to receive updates on your Android. Whenever an app developer rolls out an update, all you'll need to download will be that updated bits rather than downloading the entire APKs. This makes the application updates faster and also reduces the burden of Data Usage which is limited in most cases. On average, the app update will be about 1/3 size than that of full APK.
Introduction of Google Now and Improved Google Voice Search
Drastic improvements are made by Google to it's default Voice Search functionality with the newbie in the town Google Now, as the new search functionality makes the search results more visual then ever such as displaying search results as cards for weather, navigation routes, and much more. This is a step forward from Google to answer the much hyped Apple's Siri, a virtual assistant.
Enhanced Accessibility 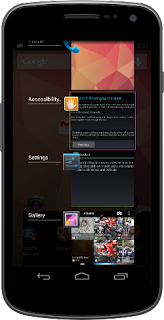 Apps that use standard View components inherit support for the new accessibility features automatically, without any changes in their code. Apps that use custom Views can use new accessibility node APIs to indicate the parts of the View that are of interest to accessibility services.
Higher-resolution contact photos
With Android 4.1, we can finally store our contact photos at a whopping 720 x 720, allowing contact pictures to be truly beautiful. Apps can store and retrieve contact photos at that size or use any other size as needed.
These features, as mentioned at the start of the article, are only a part of the whole bunch of the features. Just because this is a “dot” release doesn’t mean it isn’t major. This is more than just API enhancements. This is a major update.
[Inputs from : Android 4.1 for Developers]

Ever wondered where the websites that you visit sends the information about you, and to whom? Well, if you are really eager to know that from where to whom the information is being

Basically, as you must be familiar with this fact that an IP address is a combination of the 4 decimal numbers, separated with a dot between them. An IP address is used to identify your device